Building a virtual Sukkah inside Minecraft 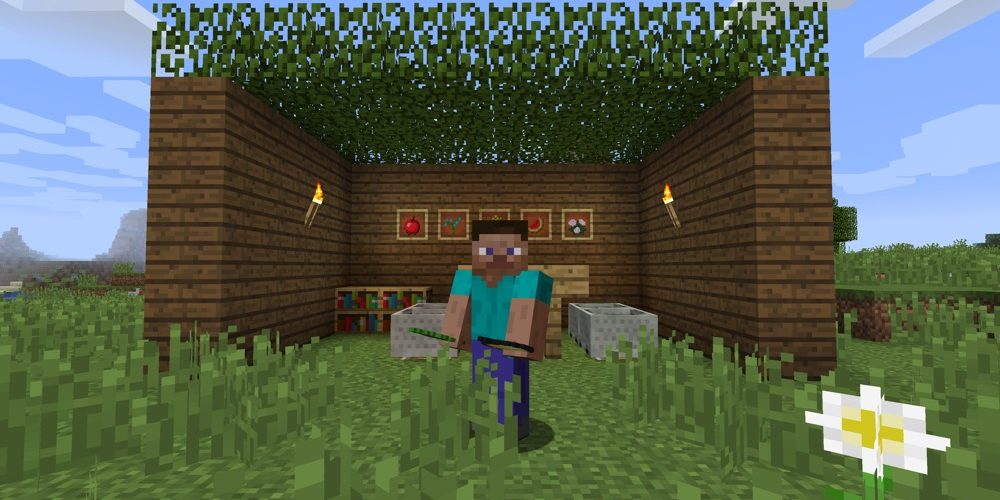 We’re in the middle of Sukkot, and no doubt you’ve already enjoyed eating, sleeping, and hanging out in your backyard sukkah. But have you ever considered doing those things virtually?

A few years back, Behrman House created a Minecraft server where players could build a sukkah based on a set of given instructions. Unfortunately the server is no longer up and we cannot check out any of the creations.

But the very idea got me thinking about it more. Could one fulfill the laws of Sukkot by building a sukkah inside Minecraft? If a person lacked the physical space for a sukkah, could this video game work as a spiritual substitute?

To be sure I covered all the bases, I posed these questions on a Facebook group that describes itself as “a place for serious discussion of Judaism.” Between the laughs and eye-rolls (yes, I could feel those digital eye-rolls), I actually got some interesting perspective. Then I booted up Minecraft and got to work.

Right off the bat, we know there is no way to get around the use of electronics on Yom Tov and Shabbat. So for the purpose of this activity we’re going to ignore that, or just consider this a suitable dwelling for Chol HaMoed.

First thing to do was to find a suitable place to build a sukkah. A kosher sukkah has to be under open skies, with no trees or roof blocking the top.

So of course, the game plopped me in the middle of a dense forest. I journeyed around to find a better spot and found some open plains with a gorgeous view. 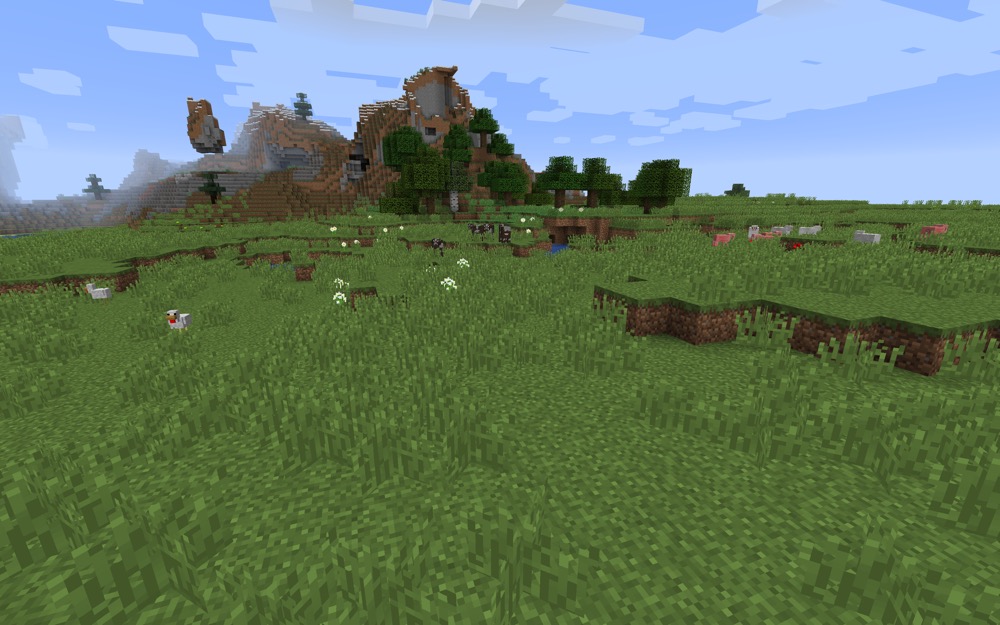 Next came time to build. A sukkah must have at least two and half walls, but it is customary to build all four. I decided to model my Minecraft sukkah based on the one I built in college with Hillel. This particular sukkah had three walls, inviting the world to look inside.

The top of a sukkah cannot be higher than 20 amot, which equates to a little under 10 meters. According to the Minecraft wiki, each block is one square meter. So as long as kept it lower than 10 blocks, I was fine.

Also there are no requirements for what materials the walls are made of, as long as it is wind resistant. I went with spruce oak planks because I like the look. 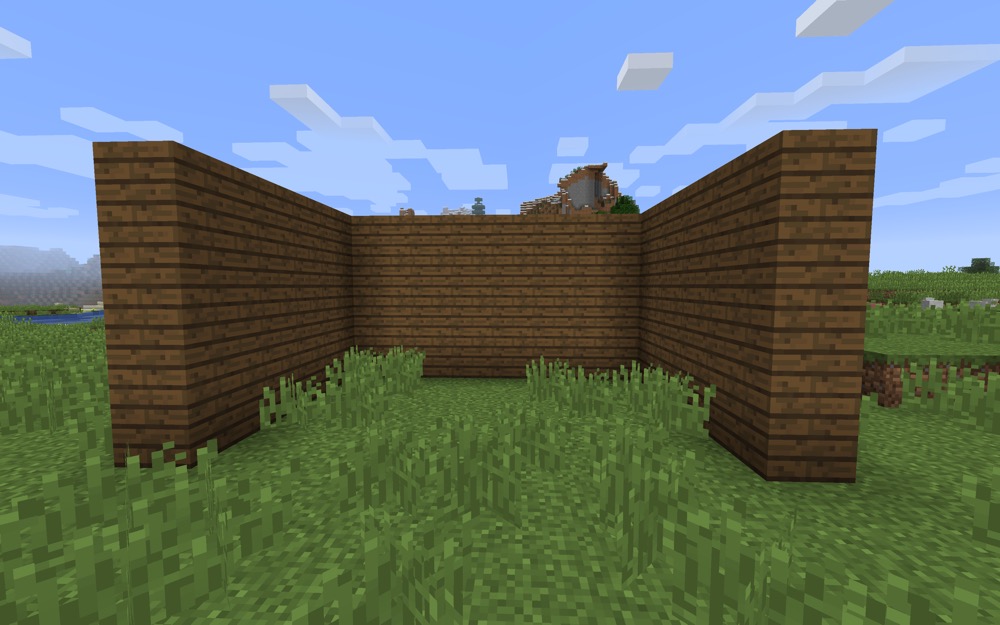 The roofing material, or s’chach, must be made with something that grew in the ground but is no longer attached to earth. You have to be able to see the sky through the material, but there should be more s’chach than sunlight.

This was a no brainer… tree leaves let just enough sky in. I quickly built a roof made of acacia leaves. 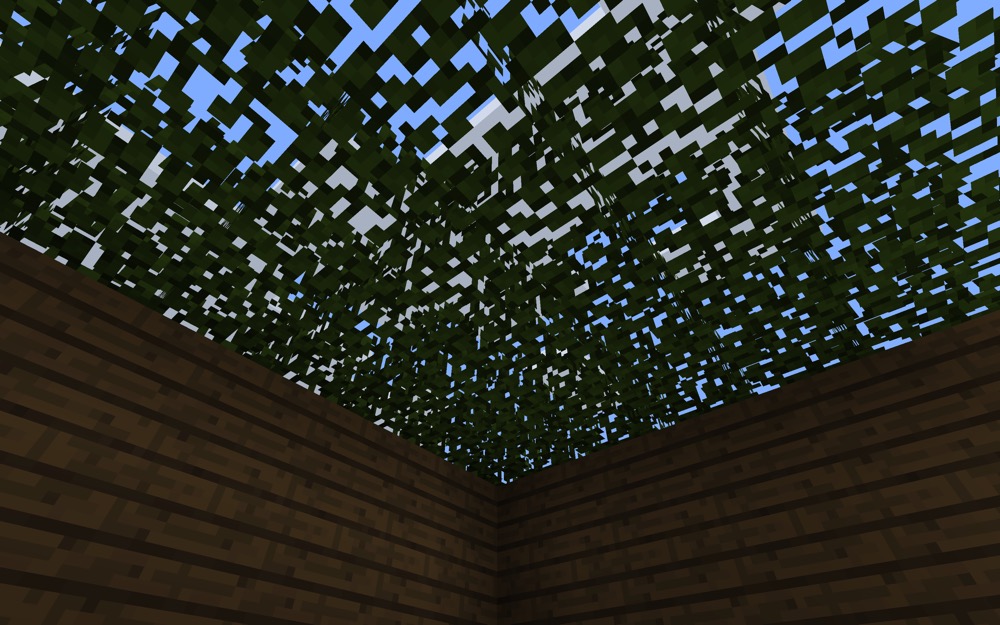 4) Sitting in the sukkah

Someone in the Facebook group pointed out a big problem: one of the mitzvot of Sukkot is to sit in the sukkah, but for the most part you can only stand Minecraft. There are mods to the game that allow you to sit on specific objects, but I didn’t want to deal with that.

Instead, I learned that there are two items in non-modded Minecraft that you can sit in: boats and minecarts. I wasn’t about to dig a moat into my sukkah to accommodate a boat, so I plopped down a couple of minecarts instead. I also built an oak table to go with the “chairs.” 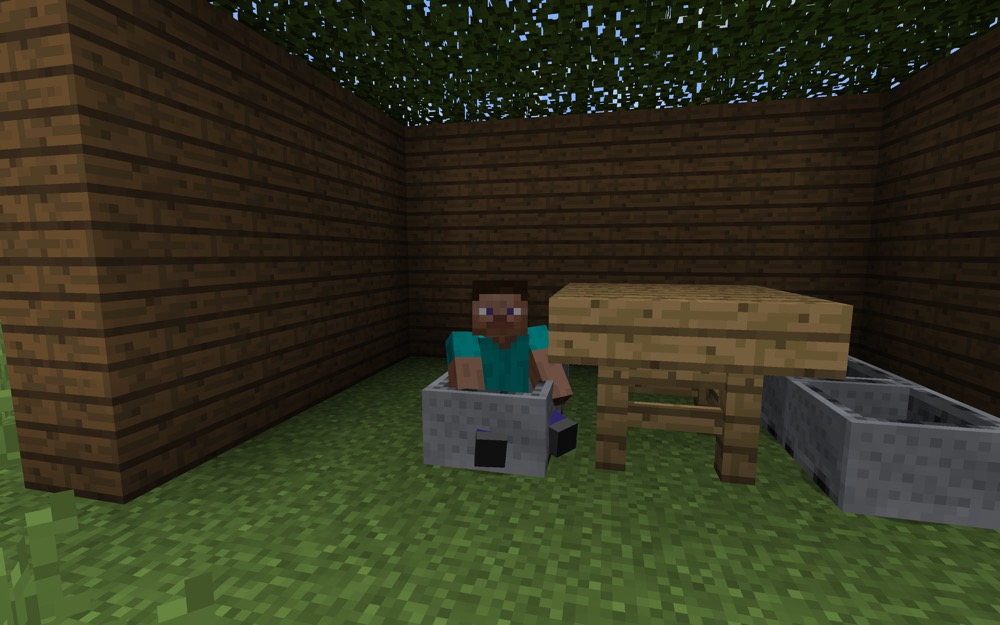 I wanted to make the place look a little bit more inviting, so I started to decorate. First I added some lights to brighten up the place. Then I added pictures of fruit and flowers (I was attempting to go for a Shivat HaMinim theme, but I settled on whatever looked pretty). Lastly, I built a couple bookshelves in the corner, to hold some siddurs in case my guests wanted to daven Shacharit or Birkat HaMazon.

Appropriately enough for the holiday, it started to rain as I was decorating. 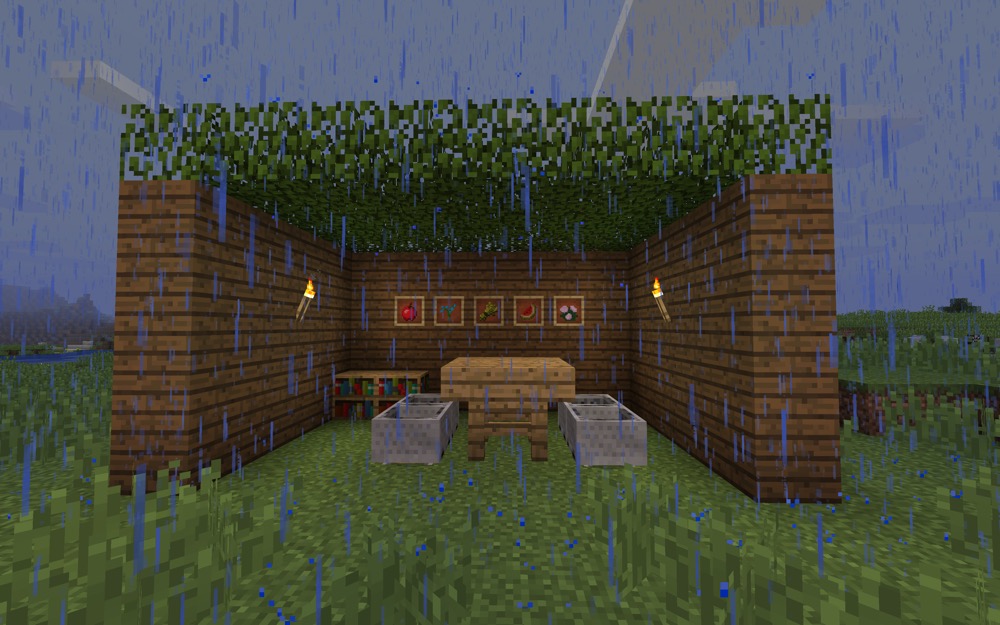 6) Shaking the lulav and etrog

I had to get a little more creative for this one. Unfortunately you cannot find any of the Arba’at HaMinim in the world of Minecraft (I know, can you believe it?). Instead I yielded a jungle sapling in my right hand, and held a golden apple in my left. Not exactly the correct species, but they looked similar enough for the purpose of this exercise.

I couldn’t place the two objects directly next to each other, but I could turn in every direction and shake, shake, shake. 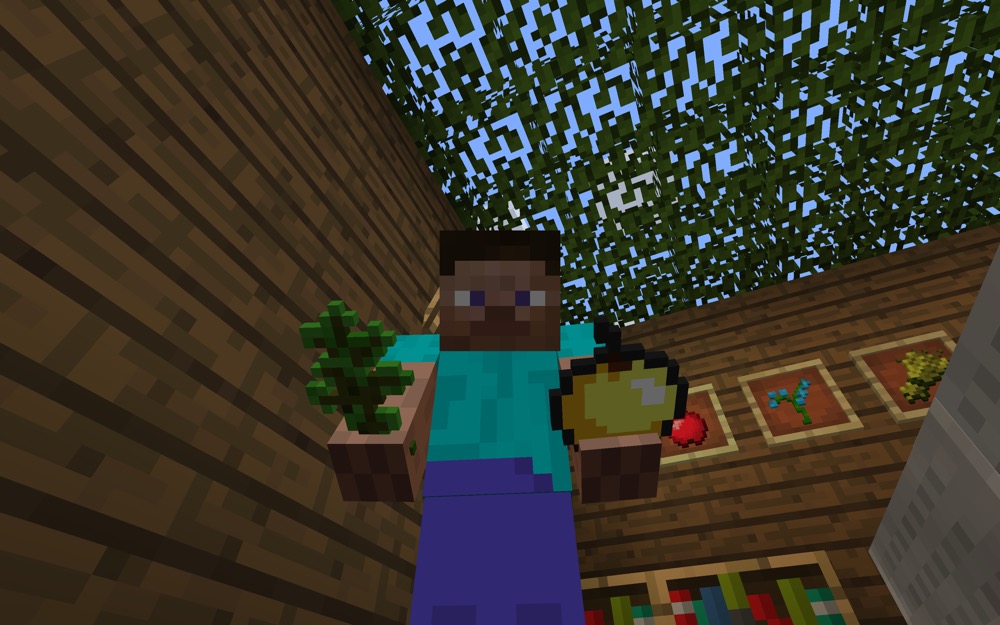 As we all know, zombies and skeletons tend to come out at night in Minecraft. I play on Peaceful mode (or as we call it in Judaism, “Mashiach Mode”), but if it came to it, I would build that fourth wall and add a door.

7) Living in the sukkah

The solution that comes to mind is virtual reality. A VR edition of Minecraft does exist for Oculus Rift, Samsung Gear, and other VR headsets. Unfortunately I don’t own any of these, so I can only imagine how cool it would be to step inside my virtual sukkah and “live” in it. 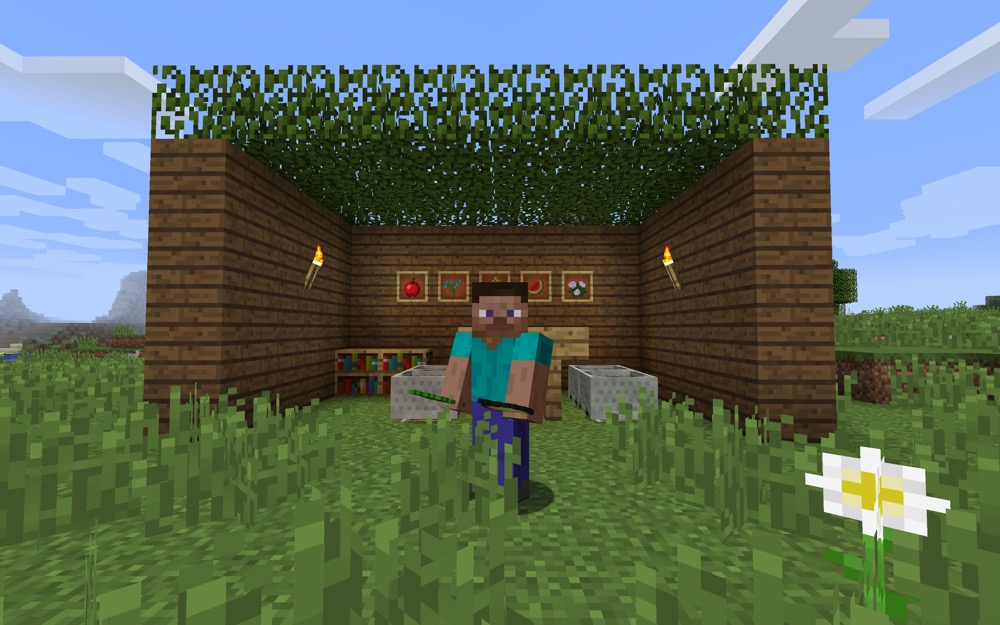 I would never intend for a video game to replace building a physical sukkah, but could it work as a substitute when no other options are available? It reminds me of how many synagogues now live stream their services for those who are unable to attend in-person. Imagine someone in the hospital or traveling on the road, who does not have access to a sukkah. Certainly it would be better to dwell in a digital sukkah than not to dwell at all.

Naturally, the Torah did not anticipate that one day we could enter and participate in a simulated world. There are many options: Minecraft, Second Life, The Sims… maybe even Fortnite (Sukkahnite?). Going forward it will be fascinating to see how Judaism evolves in the digital space.