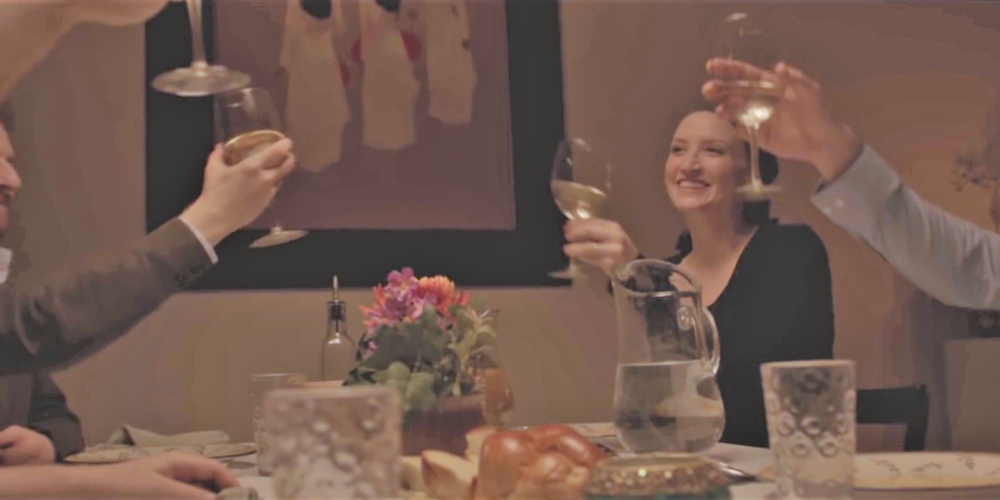 Here’s the pitch: “A group of young Orthodox Jews navigate the modern world.” Sounds like the premise for a wacky fish-out-of-water comedy.

But that’s not the idea behind Kiddish Club. Instead, this upcoming web series wants to take a realistic approach to Orthodox Jews in our modern world. No outdated caricatures at the expense of the Jewish people; just real stories that real Jews can relate to.

Two months ago, Benjy Shuter and Paul Brick and friends launched an Indiegogo campaign to get their project off the ground, along with a 3-minute pilot introducing us to the world of Kiddish Club: a newlywed couple and two of their friends sitting down to enjoy a Shabbat dinner. And by enjoying, we mean they’re arguing about salad tongs.

It was enough to convince us of its web series potential. We asked a few questions to Benjy and Paul, who gave us wonderful and funny insight on their creative process.

Popcholent: Where did the idea of Kiddish Club come from?

Benjy Shuter: Me and Paul came up with Kiddush Club in our senior year at Binghamton. We wanted to make a show that spoke to our unique cultural experience as Orthodox Jews.

We felt there wasn’t much out there for us to connect to as Jews. We both watched a lot of TV growing up. Like way too much. Like enough to call a doctor about. And I remember distinctly when I was younger, I’d be watching Saved by the Bell, or something like that, and I’d be totally absorbed in what was going on, having the normal out of body experience that comes with watching TV, and a character would say something like “Hey, you want to go get a cheeseburger this Saturday?” And just like that I was thrown out of it. The people on the screen were not like me. There were these constant little reminders that I was different, and I couldn’t ﬁnd someone in the media landscape who was like me. The implication of that realization on a deeper level is that the things I was dealing with that were speciﬁc to my Jewish existence, were not being addressed in modern media.

With Kiddush Club, we want to portray characters that are relatable, because after all, Jews are not dramatically different than anyone else on a personal level, but who go through dilemmas that are deﬁned by Jewish culture. More than anything, Kiddush Club was created to give other Jews, who like us found themselves left out of popular media, something to connect to. So we came up with characters who we recognized from our Jewish community, and built plots around the things we’ve been through living in the Jewish world. We love being Jewish, and everything that comes with it, and we plan to build a world around that love.

How does the spirit of Shabbat bring these characters together?

Benjy: Shabbat is the center of Kiddush Club’s universe. These characters go through a lot every week, whether it’s adventures or personal issues, but always get together every week at the Shabbat table. No matter what’s happening in everyone’s lives, it all stops for Shabbat.

It’s funny, being that I’ve been Shabbat observant my entire life, it was deﬁnitely a very odd feeling shooting a Shabbat scene on a Sunday. We got dressed in Shabbat clothes, and we sat around a Shabbat table with challah and everything, and then there was this camera and a whole crew buzzing around us. It was surreal.

Jewish characters on television usually come in only one of two forms: the secular Jew with little attachment to religion or culture (the “Ari Gold”), or the haredi Jew with traditional black hat, beard, and payot (the “Danny Saunders”). Why have we not see more characters that fall somewhere in the middle?

Benjy: That’s so true and it’s something that’s always frustrated me on a very personal level. Every Jewish character in popular culture is either aggressively secularized or a one dimensional caricature.

I think there are a few reasons for that. The most basic factor is just that there aren’t that many of us. The audience of people who would relate to such a character is small. However, that’s not a complete explanation because media, especially television, is about getting home from a long day of work and escaping our normal identities. Not many of us sit on a big wall and guard society from snow zombies, but that doesn’t stop us from rooting for Jon Snow.

The main factor is that Jewish community, especially Orthodoxy, is very skittish. We’ve been abused by a lot of the societies we’ve called home. It wasn’t unusual in our history for some aspect of Judaism to be distorted and used as an excuse for our persecution. The classic Jews using christian blood to make our matzah is a good example of that. I think that that kind of exploitation and perversion of selective details from within our very insular community has been stamped into our collective subconscious as a people, and as a result, we’re very careful about sharing parts of our culture with the outside world.

So the only thing for popular culture to grab onto about Jews is what it sees from the outside. It perpetuates images of Hasidic Jews that stand out easily in a crowd, or representations of the culture of the Jewish people on the creative end of the the entertainment industry, many of whom (by no means all) are secular.

However, American culture at large has become very curious about the diverse cultures of which it’s comprised of. I think people are curious to know what the deal is with Judaism, more than just the superﬁcial stuff they already know. Almost every person who I meet who is not Jewish, has about a million questions for me when they see me wearing a kippa. I’m sure this is the experience of a lot of Jewish people. The kinds of questions I get are indicative of just how much non-Jews want to learn about us, and just how little they know. I remember one time someone asked me, “I know you’re not supposed to watch TV on the Sabbath, but what about if you’re on an airplane? What do you do the whole time?”

American society is eager to get to know Jewish culture, we’re mysterious and they’re fascinated. The Jewish community, is understandably cautious. It is my humble opinion, however, that we jump in and ﬂaunt our incredible, one of a kind Jewish culture.

Most of your pilot pitch consists of”friendly” bickering over salad tongs as a wedding gift. Do we have a lot of Seinfeldian arguments to look forward to in a full season of Kiddish Club?

Benjy: Deﬁnitely some good juicy bickering. I don’t think you can have a show about Jews without having them bicker about ridiculous things. However, one thing we want to cultivate is a more warm, friendly atmosphere for the show. It’s a difﬁcult thing to do in a 3 minute video, because it takes a good amount of groundwork.

Our two main creative inﬂuences for Kiddush Club are New Girl and Flight of the Conchords. New Girl just has this wonderful chemistry between its characters. No matter what is going on in any given episode, there’s this constant, incredible positive energy within the friend group of the show. An unshakable tenet of that show is that the characters really care about each other. We’d really like something similar for Kiddush Club.

Flight of the Conchords is a show that I watched obsessively in my very formative years. It plays around with surrealist comedy, which is a kind of comedy that’s really important to myself and Paul. The problem with surrealist comedy, especially the really distilled forms like Tim and Eric, is that if you don’t get the joke, it can often feel like the joke is on you. That’s a really bad feeling. Flight of the Conchords though, takes surrealist comedy and makes it friendly and accessible. That’s the kind of comedic strategy we’d like to tap into. We have some crazy stuff planned, the kind of stuff that toys with reality.

So to sum up a really, unnecessarily long answer to a yes or no question: yes there will be more bickering, but there will also be some other cool stuff.

In the pilot, Shira says “I keep telling myself my mom went through this, but I’m just not sure,” followed by a big l’chaim. What do modern Orthodox Jews deal with today that differs from previous generations?

Benjy: This one has a lot of answers. The obvious answer, I think is actually the best answer. It’s about accessibility of information and communication. It’s made it very hard to keep ourselves separate from the world around us.

Judaism likes to keep a barrier between itself and whatever society is currently hosting it. Technology has been incredibly effective at tearing down barriers between people, intentional or otherwise. The incredible technological advances of the past 20 or so years has made life easier in a lot of ways. It’s gotten to the point where eschewing those technological resources makes it difﬁcult to function at all in society. They even make things within Judaism much easier nowadays. Not sure what time Shabbat starts? Google it. In a new town and need to ﬁnd a kosher place to eat? Open up an app. However, that same technology inherently connects us to the outside world to extent that has never been seen in the history of mankind.

My rabbi in yeshiva once said that “kadosh” is literally translatable to “separate.” So when the Torah says “Kadoshim T’hiu,” we’re being told that being separate is a way of life. For the duration of Jewish history, we Jews have kept ourselves separate in order to keep our way of life, and Jewish life itself, whole. The main issue modern Orthodox Jews deal with today that is different from any previous generation, I would say is this: In a world, where it is impossible to be separate from the outside world, how do we keep Orthodox Jewish life whole? If Kadosh does indeed mean separate, how do we now fulﬁll God’s commandment to us, “Kadoshim T’hiu”?

Other than gifting salad tongs, what is your oddest experience at the Shabbat dinner table?

Paul Brick: I was at a Shabbat dinner table once with this German med student. He was telling us about what he was learning and he mentioned a chapter in his textbook about what to do when someone has a fork stabbed in their head. A whole chapter! I couldn’t believe it- what the heck is happening in Germany that this speciﬁc injury demands a whole chapter? And what could it possibly be about? How many words does it take to explain how to pull a fork out of someone’s head?

The weirdest part of this whole thing was that no one else was weirded out by this. Everyone else around the table is just politely nodding along while I’m trying to wrap my head around domestic abuse in Germany.