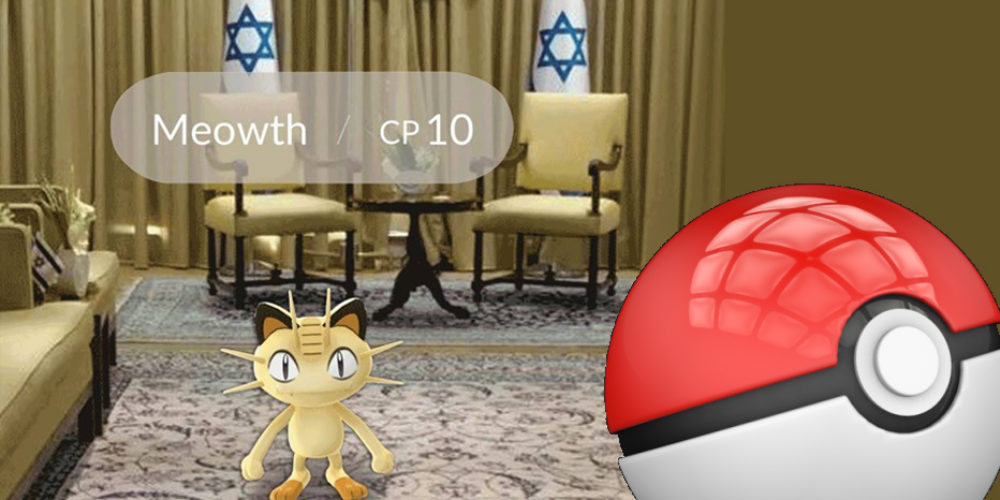 If you’ve noticed people more glued to their phones than usual the past few weeks, it’s probably not because of a very important text message. It’s because the world has jumped onto Pokémon Go. People are trying to be the very best (like no one ever was) in countries such as the United States, Japan, New Zealand… and even Israel.

Pokémon is no stranger to Israel, as the franchise was introduced to the country in 1999 when the TV show was first broadcast on the Children Channel. The new app has not been officially released in Israel, but eager players have found ways to sideload the game onto their phones.

And there are plenty of players to be found. As of this posting, over 8700 people belong to the Pokemon Go Israel group on Facebook.

Perhaps the most famous Israeli playing the game is Reuven Rivlin, the President of Israel. Last Wednesday, a screenshot from the game was posted on his Facebook feed, featuring a Meowth inside the meeting room at the President’s residence. Captioned with the image in Hebrew are the words “Somebody call security.”

Rivlin isn’t the only Israeli with Pokémon fever. One IDF soldier was very excited to find a Pikachu in the bushes.

Another soldier was so devoted to this mission that he modified his uniform to show it.

And of course, where better to catch a Sandshrew than at the Western Wall?

But it’s not all fun and games (even though, yes, it is by definition a fun game). The IDF had to issue a warning to soldiers not to use the app on military bases, with the fear that they may reveal sensitive information about army operations.

Meanwhile, the Israel Cancer Association has warned people to protect themselves from the sun, especially considering the hot Israeli desert.

With the fad unlikely to die any time soon, there is plenty of opportunity for more Israeli Pokémon Go news to occur. Here are a few predictions that we’re anticipating:

Only time will tell if our wildest Pokémon dreams will come true. Until then, happy catching!