The Homer Calendar lets you count the Omer with ‘The Simpsons’ 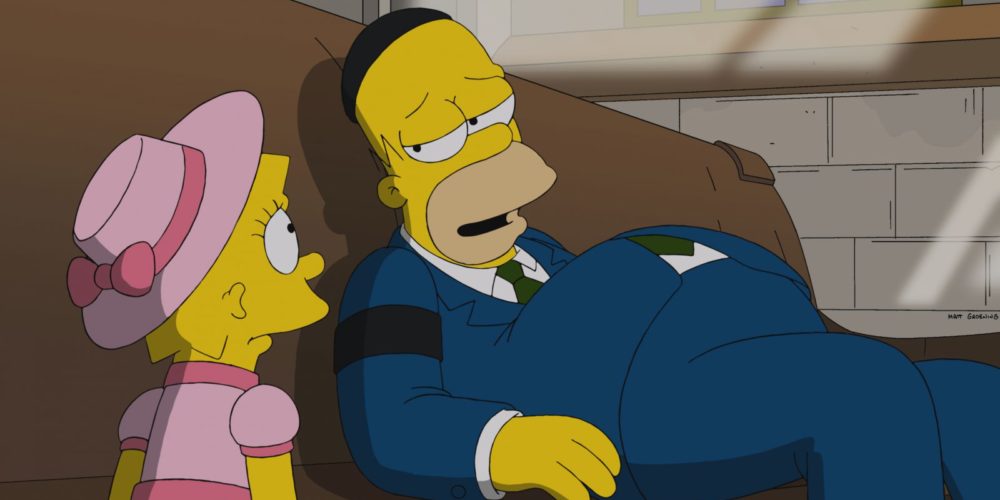 With Passover now in full force, we have begun counting the 49 days to Shavuot. The ritual of counting the Omer may seem like a tedious goal, but Brian Rosman found a way to make it relevant: theme it around America’s favorite TV family, The Simpsons.

Rosman’s website, The Homer Calendar, is a simple concept. For each night of the Omer, there is a web page with the blessing and the counting… along with a picture of Homer Simpson. There is even a printable version in case you want to plaster the many faces of Homer on your wall.

In addition to the Omer calendar, the website continually catalogs every Jewish-related joke in The Simpsons history. Considering the show has been on for 30 years, this is no easy task.

In honor of the Homer Calendar’s 20th anniversary, we asked Rosman a few questions about his “one joke taken way too far,” as well as his thoughts on Jewish Simpsons fandom.

PopCholent: What inspired you to create the Homer Calendar?

Brian Rosman: I was inspired by the opportunity to marry together almost all of my major interests: popular culture, humor, Jewish observance from a non-traditional approach and the internet. The joke (Homer=Omer) was not my original idea. But when I first heard it in 1999, it immediately came to me as a website calendar where one could click on a date and the Omer count for the day would pop up, along with a Homer Simpson picture. This was back when everyone was making their own primitive websites. I had first started watching The Simpsons in Israel, when our family lived there in the mid-90s, and our daughter was 5 and 6. It was one of the many subversive things we did together. So in 2000, a friend, Yosef Abramowitz, had just started a web site for Jewish families, and he offered to host the original site.

How can the Homer Calendar get kids interested in something as mundane as counting the days to Shavuot?

I’m not sure it does, or at least not that much. Kids know when they’re being sold something. But Jewish educators have again and again tried to use The Simpsons as a way to entice young people to engage with Judaism. When The Simpsons Movie came out in 2007, the Jewish Outreach Institute suggested using the film to somehow “encourage participation in Jewish community.” They even recommended using the Hebrew-dubbed version released in Israel for an introductory Hebrew course.

A temple in Los Angeles had a Torah study class that watched 10 Simpsons episodes “as a springboard for deeper discussions on Jewish beliefs and values,” and Limmud London included a session, The Wisdom of the Simpsons: Learning Jewish Values from our Favourite Animated Family (“You’ve heard of Pirkei Avot; now it’s time to study Pirkei Simpsons”). I heard from the educator at a London synagogue who has a Simpsons mock seder, acts out the weekly Torah portion Simpsons style, and has the students discuss how Bart and Lisa would have reacted to Egyptian slavery.

Is this effective? Putting a Simpsons’ gloss only works if the underlying material has value.

On top of the comprehensive Omer—which you have updated the dates for every year—the Homer Calendar doubles as an encyclopedia of everything Simpsons and Jewish. This includes Jewish moments within the show’s episodes, newspaper articles, and Jewish Simpsons fandom in the real world. Exactly how big a Simpsons fan are you to collect all this?

I’m not one of those Comic Book Guy “fans,” thank you, but I still watch every week… religiously. As everyone knows, the show has lost most its sparkle, but I find occasional funny moments, grins if not laughs. But since I’ve taken on this responsibility as a Simpsons/Jews completist, I watch every episode to see if there’s anything Jewy. And there are, several times a year now. These get added to the site.

The internet has changed a lot in 20 years, when you first launched the Homer Calendar. How has your site adapted to the ever-changing world wide web, and what has inspired you to keep it going?

The site is stuck in early 2000s web design. I do it all by hand, figuring out the code myself, so it’s very, very simple. So it looks very outdated, but it works. When I started, the site had its own message board, but that’s given way to a link to Facebook. I also now send out two Facebook posts and tweets each day of the Omer, one with that night’s count and the other with a Jewish something from the Simpsons.

I’ve been inspired by all the folks who say they depend on it each year. One of the biggest fans was an Orthodox woman, an American immigrant in Israel who went by the name Safta Rivky.  She would write to me every year for over a decade to thank me. She died, sadly, in 2017.

Can you share some details on what happened when 20th Century Fox sent you a cease and desist letter?

During my third year, I got an email from Fox’s Beverly Hills lawyers accusing the site of violating their copyright in the Simpsons and demanding that I “cease and desist,” and remove all Simpsons graphics from the site. Interestingly, the letter was dated exactly on Shavuot, the last day of the Omer count. It reminded me of that old joke where the judge gives someone 8 days to take down an illegal sukkah. I wrote back, saying that I thought the site qualified under the “fair use” exception to copyright law, and I also shared some of the praise the site received from Jewish educators. I never heard back. Fox has since let fan websites (there are hundreds of them) know that they won’t get in trouble if they put a disclaimer and copyright notice on all their pages, which I have done.

What is your singular favorite Jewish moment on The Simpsons?

My favorite might be a 2014 episode that covered Jewish nostalgia, theology and our social justice imperative. Krusty dreams of Jewish Heaven, where even Portnoy has no complaints. There’s free egg creams at Ebbets Field where the Brooklyn Dodgers play the NY Giants, and at the Oys ‘R’ Us store, a sign says, “The whole store is a complaint department.” Meanwhile, people line up at the Joe Lieberman Presidential Library.

Krusty’s heavenly reverie is interrupted by a vision of his late rabbi father, voiced by Jackie Mason. “Schmuck,” he calls out, “There’s no Jewish heaven. Our faith teaches us that once you’re dead, that’s it. Kaput. It’s dark, it’s cold, it’s like that apartment we lived in before I started doing weddings. Go back to earth! Do something with your life! Help people!”

Earlier this month we wrote an article in which we stated Futurama‘s Zoidberg probably isn’t the best character to represent the Jewish people. Do you think The Simpsons‘ Krusty the Clown would make a better contender?

Not for me. Krusty lies, cheats, is vain, and cares only about himself. Here are some better suggestions, from the show: First, there’s the innocence of Lisa’s imaginary Jewish friend (“Her name is Rachel Cohen. And she just got into Brandeis.“).

Or, there’s the perceptiveness of Dolph, one of the bullies, who practiced for his Bar Mitzvah in front of his bully friends. Last year he was shown tripping another kid, who then started singing about his pain. Dolph said, “He turned his suffering into entertainment, just like the Jewish people.”

Or perhaps the Jewish pride of Duffman, the mascot/spokesman for the Duff Beer company. In a 2018 episode, he shows up at Moe’s wedding, but announces he needs to leave soon, because, “Duffman has a beer mitzvah at 4:00. Putting the brew, in Hebrew. Oh, yeah!”

But perhaps my choice is Rabbi Krustofski, Krusty’s father. Although he disagreed with his son’s choice of career and lifestyle (“Seltzer is for drinking, not for spraying. Pie is for noshing, not for throwing.”), in a 1991 episode, Bart successfully used real Talmudic passages to convince the Rabbi to reconcile with Krusty.

As if The Simpsons could find a plot they haven’t done yet, what is the next Jewish topic you would like them to cover?

For this week, it would have to be a parody of Shtisel. Or perhaps work in Sukkot somehow, my favorite holiday.