The Pork Predicament, or How to Embrace “Year of the Pig” as Jews 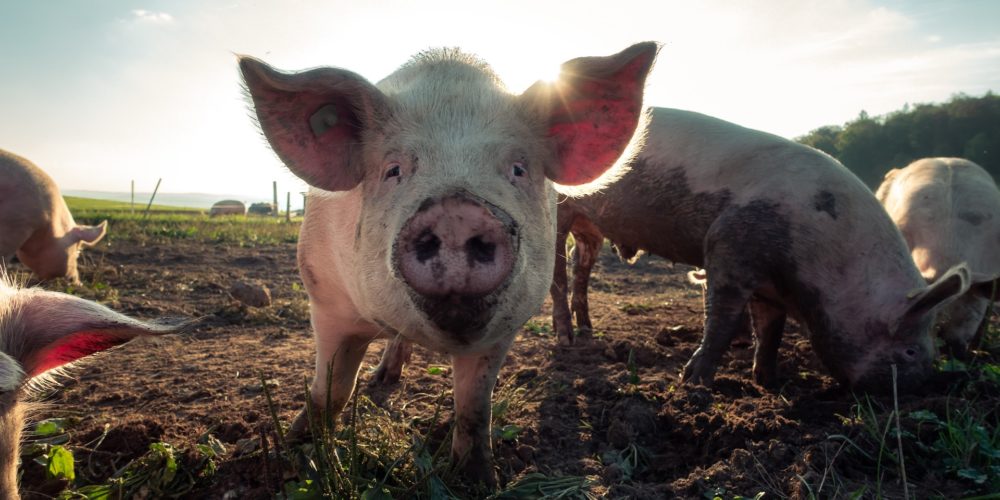 This week began the Chinese New Year, and according to the Chinese zodiac, we’re now living in the Year of the Pig. For most people, this is all fine and good. But for us Jews, we’ve always had a problematic relationship with pigs.

Let’s start with the basics: pigs are not kosher. It says in the Torah, “And the swine–although it has true hoofs, with the hoofs cleft through, it does not chew the cud; it is unclean for you. You shall not eat their flesh, and you shall not touch their carcasses; they are unclean for you.” (Leviticus 11:17). So that’s the basis of not eating pork.

Sidebar: Can we talk for a second about how the word pork is almost exclusively used by Jews? Gentiles always refer to it directly as ham, sausage, bacon, or the McRib. The only time “pork” comes up is when a Jewish person explains that they cannot eat it. For example, “Oh I can’t eat that mouthwatering pepperoni and sausage pizza you ordered for everyone in the office because I don’t eat pork, Susan.” No one would say that except Jews. Not even vegans would use that word.

However, the pig problem extends beyond food. It seems we have shunned the animal altogether. Which is odd considering we don’t treat other non-kosher animals (think dogs, horses, and camels) that way. So what’s the deal with the pig?

The simplest explanation would be due to its reputation of being a filthy animal, and in turn, associating with the pig would make us dirty. Maimonides agrees with this viewpoint. In his Guide for the Perplexed, he writes, “the principles reason why the Law forbids swine’s flesh is to be found in the circumstances that its habits and its foods and very dirty and loathsome…. If we were allowed to eat swine’s flesh, the streets and houses would be dirtier than any cesspool, as may be seen in the country of the Franks. A saying by our sages (Babylonian Talmud Berachot 25a) declares that the mouth of a swine is as dirty as dung itself.”

A different interpretation comes from Rabbi David Small, a fictional detective created by author Harry Kemelman. In his book Conversations with Rabbi Small, the titular rabbi says: “The meat of the kosher domestic animals we can regard as essentially a by-product. We raise the sheep for its wool, and the goat and the cow for the milk they give… As for the non-kosher domestic animals, we use the horse and the camel to provide transportation. The dog protects the house from intruders. The cat keeps the house clear of rats and mice. Only the pig serves no other purpose than to be killed and eaten, and that is abhorrent to us.”

But perhaps the best answer comes from the Talmud. In Leviticus Rabbah 13:5, the Roman empire is compared to a pig. When the pig shows off its hooves, it is almost saying, “Hey look, I’m clean and kosher!” but it fails to mention how it doesn’t chew its cud. Likewise, the Roman government would commit violence and robbery, under the guise of executing justice. This means that the pig represents a hypocrite, or someone who acts righteously while hiding their flaws. Rabbi Meir of Premishlan took this analogy a step further. He said the pig who acts with good intentions but ends with poor results does not properly fulfill the mitzvah.

So what can we do to embrace the Year of the Pig and not offend our Chinese brethren? After all, Chinese and Jewish people are the ultimate allies on Christmas. Perhaps it’s time we reconsider the pig as a problem.

Maybe we can stop viewing the pig as dirty, abhorrent animal that represent the worst of human nature. According to the Pig Placement Network, pigs are not naturally dirty animals. They do not shed, they have few health problems, and they can wallow in water instead of mud. The popular image of a filthy pig is due to poor living conditions on farms.

Apparently they are quite intelligent as well. The above pet owner says that his pig can paint pictures and help sort the mail. In a 2015 scientific journal called “Thinking Pigs”, Lori Marino and Christina Colvin studied that pigs have excellent spatial cognition, and they have the ability to prioritize important memories. As foraging animals, pigs are naturally curious and seek to learn more about their environment.

It seems that Judaism views pigs as a bad thing because of popular belief that pigs are inherently bad. But we know better than to judge a book by its cover (Leviticus 19:15 literally says, “Judge your neighbor fairly”). If we were to turn around our perspective of pigs, perhaps we wouldn’t be so quick to shun them.

That doesn’t mean we need to start wolfing down pork (pigging down pork?). Nor does it mean you need to run to the nearest pet shelter and adopt a pig today. And it also doesn’t mean we have to stop referring to those mini hot dogs as Moses in a Basket. But on this Chinese New Year, we can learn to stop worrying and love the pig.