Was Noah actually a Time Lord? 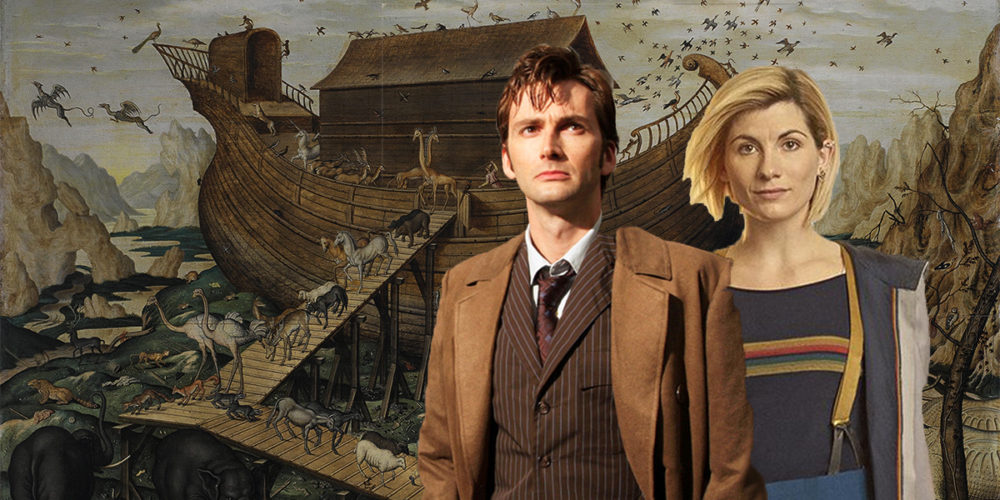 This week, people across the world are talking about an important cultural figure who travels around on a ship.

Of course we’re talking about Noah.

Or did you think we meant the titular character from Doctor Who?

It is no coincidence that season eleven of Doctor Who premiered the same week that we read Parshat Noach. Here are four ways that prove Noah was actually a Time Lord.

1) He lived an incredibly long but patient life

The Torah states that “All the days of Noah came to 950 years; then he died” (Exodus 9:29). That’s a pretty hefty age, especially compared to the lifespan of other Biblical people including Abraham, who lived to 175, and Moses, who lived to a measley 120.

How did Noah keep busy over the course of a millennium?

One interpretation of the text implies that he spent 120 years building the ark and gathering the animals. Then the Torah states that Flood began when Noah turned 600 years old. Noah lived on the ark for over a year, and then he lived for an additional 350 years after that!

Either a very busy guy, or he took far too many naps during work.

Meanwhile in the Doctor Who universe, Time Lords can live for a very long time, possibly for thousands of years. Within just one regeneration, a Time Lord could live for a few hundred years without significantly aging.

The Tardis Wiki says that as of the Thirteenth Doctor, the character is at least 1950 years old. And while the Doctor makes excellent use of his time, he is willing to spend as long as it takes to get a job done. He spent 300 years defending a single planet. Just like building an ark for over a century, that takes a lot of patience.

2) He enjoyed traveling with companions

What would the Doctor be without his companions? Over the course of his life, he has explored time and space with many, many (most female human) people. Sometimes they are friends, sometimes they are assistants, and sometimes they simply end up there by accident. Although the Doctor claims to be alone in the universe, Sarah Jane Smith once reminded him that he has endless network of traveling friends.

So why is companionship so important? The Doctor once told Amy Pond that he traveled with others so that he could see the universe through the eyes of someone who had not already experienced it. But more likely it’s because the Doctor does not like the idea of sharing his experiences alone.

Noah rarely spent any time alone either. He entered the ark with his wife, his three sons, and their wives… a total of seven companions.

3) His ship was bigger on the inside

Okay, here is the ultimate proof that Noah must have had some Gallifreyan blood. Let’s take a closer look at the Ark. God instructed Noah to build it as such: “The length of the ark shall be 300 cubits, its width 50 cubits, and its height 30 cubits… Make it with bottom, second, and third decks” (Genesis 6:15-16).

One cubit equals the length of the arm from the elbow to the end of the middle finger, or roughly 18 inches. So the total length of the ark was about 450 feet, or one and half football fields.

And while that’s nothing compared to the size of a Carnival cruise ship, remember that Noah had to gather two of every animal. Every. Single. One.

There is no way all the animals could fit on the ark, unless… you see where we’re going with this… it was bigger on the inside!

That’s right, the Ark had to be a TARDIS. This spacecraft piloted by Time Lords is described as dimensionally transcendental, meaning that much more can fit inside than it would appear. And of course it can change its appearance too.

If you think this is too much of a stretch, even Nachmanides admitted that “The small space contained a large volume”, and the fact that millions of creatures could fit was a miracle.

The Torah says “Noah was a righteous man, wholehearted in his generation” (Genesis 6:9). Rashi interprets this to create a classic argument: Was Noah really a righteous man, or was he just better than all the evil that surrounded him? If he had been born in a different generation, would he still be righteous?

Interestingly, the Doctor struggles with a similar problem and sometimes asks himself, “Am I a good man?”

Radio Times examined a number of Doctor Who episodes in hope of answering that question. For the most part, the Doctor makes the most moral choice, even if that causes some deaths along the way (the episode “The Fires of Pompeii” is a prime example of this). As much as the Doctor appears to be the hero, even his enemies have told him “You would make a great Dalek.”

Clara tells him: “You asked me if you were a good man. And the answer is, I don’t know. But I think you try to be. And I think that’s probably the point.”

One could argue that Noah also tried to make the most ethical choice. He knew that if he carried out God’s instructions, many people would die, but ultimately it would be for the greater good.

Perhaps Noah isn’t just a Time Lord, but he is the Doctor himself! With a seemingly infinite number of lives, who isn’t to say Noah isn’t just one of many regenerations to come?