Why are there no good Chanukah songs for karaoke? 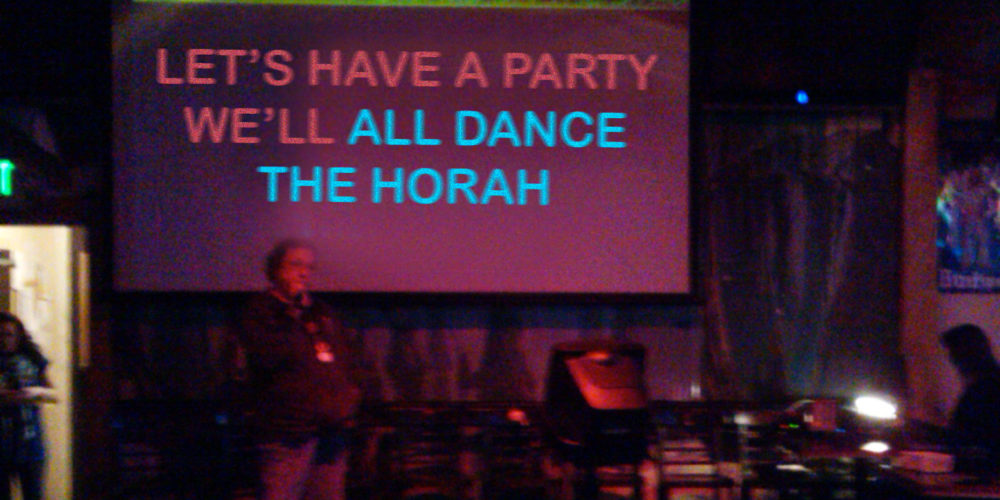 Last week I had the pleasure of attending my very first office Christmas party. Not a holiday party, as my supervisor announced early into the event, but a full-on red and green, Santa hats everywhere, Christmas party. Enjoying the company of my coworkers (not to mention the open bar), I was totally on board with the Christmas spirit. I even participated in the ugly sweater contest.

But towards the end of the party, when it was time for Christmas karaoke, I realized two things. One, it was odd being the only Jewish employee of an entertainment non-profit organization in Los Angeles.

Here me out. There is plenty of beautiful Chanukah music. Between classic childhood tunes, undiscovered Yiddish melodies, and parody after parody of acapella Hamilton arrangements… I have no shame in blasting these tunes in my car and singing gleefully as I drive to work. Yet when I wanted to select one for karaoke (granted, if a karaoke version of any of those songs even existed), nothing came to mind.

Let’s take a look at some of the Christmas songs in the karaoke catalog: Jingle Bells, Winter Wonderland, Last Christmas, All I Want for Christmas is You. Some are upbeat, some are calm. But they all give you a warm, fuzzy feeling inside. Whether you like it or not. “Merry” is the word I believe the goyim use.

Now let’s take a look at a Chanukah song: Chanukah Oh Chanukah. You’ve got some great lyrics essentially listing all the best parts of the holiday: menorah lighting, spinning dreidels, and eating latkes. But then we listen to the melody. It’s composed in a minor key! It’s a festive sound, but it’s not warm and inviting. Why do we tell people in the song “let’s have a party” if the party music is going to bum them out?

Let’s try Al Hanissim. This traditional prayer sung on Chanukah translates as “We thank You for the miracles, for the redemption, for the mighty deeds, for the saving acts, and for the wonders which You have wrought for our ancestors in those days.” Okay, so here is a song about thanking God for such wondrous things. You would think a happy, cheerful melody would accompany it. But instead, the most well-known melody is also composed in a minor key! The tune feels supercharged, as if we were about to go battle the Syrian Greek army all over again.

Changing gears, we also have songs like Maoz Tzur (Rock of Ages). It’s a slow jam, but for once, its melody is in a major key. But then you look at the official English version of the song. “Furious they assailed us, but Thine arm availed us. And Thy Word broke their sword, when our own strength failed us.” These are some dark lyrics! Is it not possible to have a Chanukah song with both a happy melody and happy lyrics?

Which leaves us with one song: I Have a Little Dreidel. Perfect! A song with lyrics and music about as complex as Twinkle, Twinkle Little Star. Surely enough, when I optioned the idea of singing a Chanukah song at the office party, a coworker sitting next to me suggested the Dreidel song. With so many other Chanukah songs in existence, it’s a shame this is the one that reached the mainstream.

Thus, without a decent candidate, I declined singing a Chanukah song at the office Christmas party. Maybe next year I’ll find the one.

But perhaps Chanukah music by nature is just not designed to give you that merry, jolly feeling that Christmas music does. And I’m okay with that. I think it’s a Jewish thing. If we need that little bit of darkness or sadness to “remind us of days long ago,” then I’ll keep my freygish melodies and depressing lyrics.

Chag Sameach and feel free to sing whatever you want to sing.

(All joking aside, my favorite Chanukah song is Peter, Paul, and Mary’s Light One Candle. It has both solemn lyrics and tune, yet I think it is a beautiful and uplifting song. That would be my karaoke song of choice.)