Parler, please remove the Jewish illustration from your front page 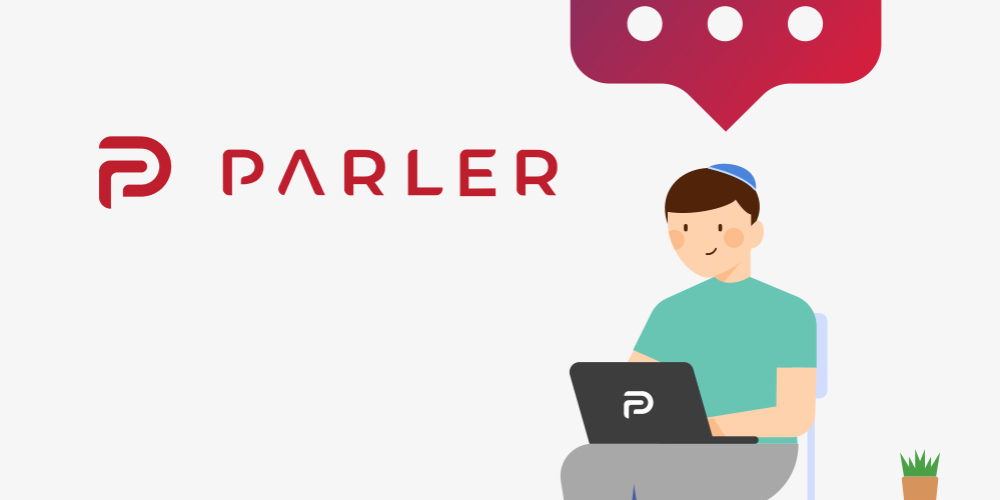 I first heard about Parler the same weekend that it was announced Joe Biden won the US election. Even though the social media platform has been around for two years, there has been a huge flux of Conservatives influencers moving to Parler in the past two weeks. Its main selling point is that unlike Twitter, it claims not to censor free speech, so there is no fear of being “deplatformed.”

I don’t know what inspired me to check out Parler’s website… sheer curiosity I suppose. Maybe I just wanted to see how ridiculous it was. And as soon as I loaded the home page, without even creating an account, I saw my first red flag.

There are three illustrations like the one featured above, with smiling rosy-cheeked cartoon characters supposedly engrossed in their Parler experience. But the illustration above specifically includes a man wearing a yarmulke.

Now this isn’t the worst thing in the world. This character isn’t drawn like those awful antisemitic stereotypes, with the hunchback, evil grin, and hooked nose (for the record, Parler’s characters have no noses at all!). He looks like a normal guy, that just wants to post his thoughts online. In fact, next to the drawing is some text that says: “Parler is here to help people with varying life experiences, and from all walks of life communicate on a platform which treats them as equals.”

And that’s the first problem. By using a Jewish person to represent “all walks of life”, they’re implying that Parler is a safe space for Jews.

Which it is clearly not. Despite having a number of prominent right-wing Jewish voices, including radio personalities Mark Levin and Ben Shapiro, several media outlets have reported white supremacist and antisemitic content on the platform. A report released on Thursday by the Simon Wiesenthal Center highlights several posts that speak poorly of Jewish communities and Israel, promote Holocaust denial, and spread QAnon theories that target Jews.

Just to see how easy it is to find this kind of content, I created a Parler account and immediately searched jewish. The first result was an anti-Israel conspiracy video, posted from a neo-Nazi account. That was enough to convince me to stay away.

And I can’t speak for people of color, but I would imagine many feel the same way about the black woman who is sitting next to the Jewish man in the illustration.

There is a second problem with this drawing. The use of a Jewish person to represent Parler implies that the website respects Judaism as a religion and culture. And if its founder John Matze has any familiarity with Judaism, he would know that his website conflicts with so many Jewish principles.

Let’s talk a moment about free speech. Judaism absolutely honors the power of speech. The poet Moses ibn Ezra said, “When a person refrains from speech, the ideas die, the soul stops, and the senses deteriorate” (Shirat Yisrael 12c). The entirety of the Talmud is rabbis sharing unpopular opinion with each other.

Yet, Judaism knows that freedom of speech requires responsibility and self-discipline. Jewish law prohibits some forms of speech outright. This includes g’neivat da’at (deceit, especially in business transactions) and ed sheker (bearing false witness). Then there is halbanat panim (embarrassing another person, or literally “whitening a face”), which some rabbis believe is as serious a crime as murder.

Perhaps the most well-known type of speech in Jewish law is lashon hara, literally the “evil tongue”, but we know it best as gossip. Speech is considered lashon hara when its intent is to harm another person, even if the statement made is true. By contrast, there is also hotzaat shem ra, or “spreading a bad name”, which consists of lies and can be considered slander or defamation. This is considered an even worse transgression than lashon hara.

Parler could argue that they simply provide the platform; it is up to the individuals to take responsibility for the words they say… right?

Wrong, because Jewish law even says something about that. “Malicious speech kills three people: the one who speaks it, the one listens, and the one about whom it is told” (Talmud Arakhin 15b). Simply listening to hate speech is as bad as speaking it, so even if Parler is not directly posting misinformation and slander, they are in the wrong for standing by and letting it spread.

I am not asking Parler to change their policies on “free speech” or what they consider to be tolerable. It would be nice, but I have zero expectations of that. I am simply asking them to remove the illustration of a Jewish man from their home page. Because if they can’t respect the importance of speech in Jewish law and culture, then they have no right to have a Jew “speak” for them.