What’s wrong with this Chanukah display at Marshalls? 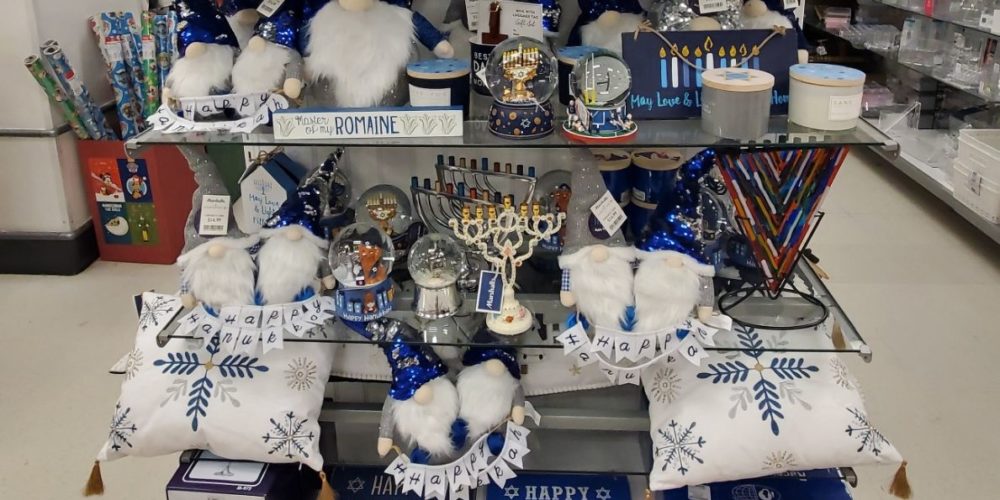 It’s an unwritten rule that if your store carries any winter festive products, then you need to have at least one section for Chanukah. It doesn’t matter how small the section is; it can be literally one shelf with a couple of dreidels and gelt on it. And if for some reason your store doesn’t want to follow this rule… fine, whatever. Who needs your stupid store anyways?

But if you do choose to have a Chanukah section at your store, at least try to get it right.

That’s why I was disappointed with the display at Marshalls, when my wife and I visited a few weeks ago. After navigating our way through at least 10 aisles devoted to Christmas, we finally found a single endcap for Chanukah. They had an interesting assortment of decorations and other goods for the Jewish holiday.

Let’s look at the positives first. This is probably the best shelf on the display. A nice variety of menorahs, even if that one in front is missing a couple of its candlestick holders. The snow globes are cute, especially the one that predicted awesome Daveed Diggs’ Puppy for Hanukkah song.

Then we have a couple of Happy Hanukkah signs and banners. These are fine too, although it would be nice to see a little Hebrew on them. But overall to the point.

Over here are these Chanukah gnomes. I don’t know when we started associating gnomes with the Festival of Lights, but I saw these things in nearly every store this year. Maybe they make the socks that good boys and girls receive as gifts on the middle nights?

Next to the gnomes is a scented candle. Other than the symbols on its lid, there’s nothing explicitly Chanukah about it. I suppose Apple Spice could represent the applesauce that we dollop on latkes, so I give that one a free pass.

But here’s where it starts to get odd. This “Master of my Romaine” sign doesn’t have anything to do with Chanukah, right? Maybe someone picked it up and put it back in the wrong spot.

Or was it on purpose after all? Because a little farther over sits a “Best Dad in the World” mug and a football snowglobe. It’s starting to look like anything that is primarily blue and white belongs on the Chanukah display. Even if it has nothing to do with Chanukah.

Same for this blue and white pillow. It’s wintery, but not a Chanukah item.

Same with these blue and white plates. At least they slapped on a Happy Hanukkah sticker so that they’re somewhat connected to the holiday.

And now the pièce de résistance… a blue and white ceramic Christmas tree. To quote a wise man, I hope someone got fired for that blunder. They gave one endcap to the Jews… and they had to ruin it with this?

The only thing that redeems the entire display is the really colorful stained-glass menorah on the right. My wife and I agreed it was the coolest thing they had there, so now it sits on our china cabinet at home, away from this disgrace of a Chanukah section.

Am I being overly critical? Maybe. I went in with low expectations, but I still came out disappointed. You would expect more from a store founded by a Jewish guy (for the record, it turns out that several discount department stores were started by Jewish businessman, but that’s a topic for another time).

But you know what? It’s all still better than this monstrosity of a menorah that we found at HomeGoods.