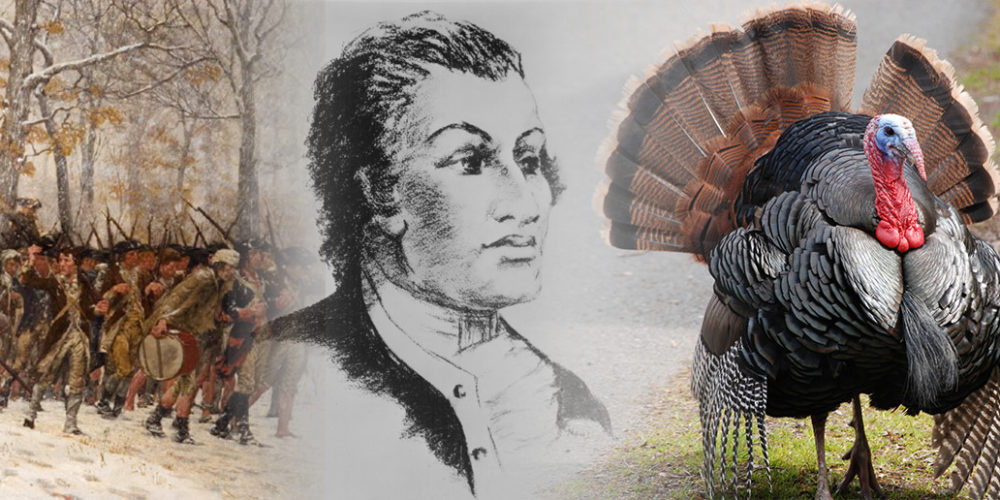 Interesting story that the use of a turkey for Thanksgiving is strongly tied to the Jewish tradition. It seems that Ben Franklin, a very affable and thoughtful man, was trying to determine between two birds to reflect our national heritage. One was to be on the national seal, and the other was to be eaten for Thanksgiving, this being a national holiday.

A discussion took place during the bitter Valley Forge winter of 1778 between Ben Franklin, Thomas Jefferson, George Washington, and Haym Salomon, the great financier of the American Revolution. Now this was a very bitter and cold winter, and supplies were running short for the Revolutionary Army. Feeding the army was the priority. The eagle was the first choice to be fed, since it was thought there would be a lot of meat on that big bird. However, Haym Salomon said he couldn’t eat the bird since predators and raptors aren’t kosher. In addition, eagles fly high in the sky while turkeys walk around a lot, so the chief culinary bird for the Revolution was decided to be the turkey and the national symbol was decided would be the eagle.

So in celebration of Thanksgiving at Valley Forge, there started a big hunt for turkeys.  Apparently turkeys were more difficult to catch than expected because they were vicious birds and made a big squawk, so you couldn’t sneak up on them very easily. Ben, Thomas, and George all tried to capture the bird using traditional means such as setting traps and using muskets, bows, and arrows, but the birds all successfully flew away.

Then Haym Salomon came to the rescue. It was he, the Jewish guy, who started a novel idea. He figured that if he approached the turkey in a very friendly way, the turkey would sense that he was being approached to be invited to dinner… rather than being caught for dinner. Haym Solomon would slowly approach the bird bend down and say, “How do you do!” This completely tranquilized the turkey, allowing him to be led away to the chopping block with a smile on his beak.

Afterwards, thousands of soldiers throughout Eastern Pennsylvania, Philadelphia, Camden and even Pottstown walked around the fields very affably approaching turkeys saying, “How do you do!” The turkeys all felt so proud of their social skills and ability to make friends… just before they were taken for Thanksgiving dinner. It was well known that the whole concept of capturing turkeys using friendliness rather than brute force was the idea of Haym Salomon the Jew. Therefore, at least in the Jewish communities, the turkey became know as a “chicken how-do,” or in Hebrew tarnegol hodu, which is how it is named to this very day.

You may think this is an implausible reason for called a turkey a tarnegol hodu in Hebrew. However, it is equally farfetched as the thought that since the word for India in Hebrew is Hodu, that the turkey for Jews was thought to originate in India.  Turkeys are not from India but are indigenous to the Americas–though Columbus originally thought he had landed in India. (By the way, there is a theory that Columbus himself had Jewish ancestry, which is another reason for eating these birds). Of course, the real reason for the Hebrew name for turkey is as I have already explained.

So whenever you see a live turkey, please try to say “How do you do” and don’t be surprised if he follows you everywhere you go. Let us give thanks on this day celebrating family and friends, as we come together and eat the tarnegol hodu. Lechayim.