This Week, Everything’s Coming Up Charoset! 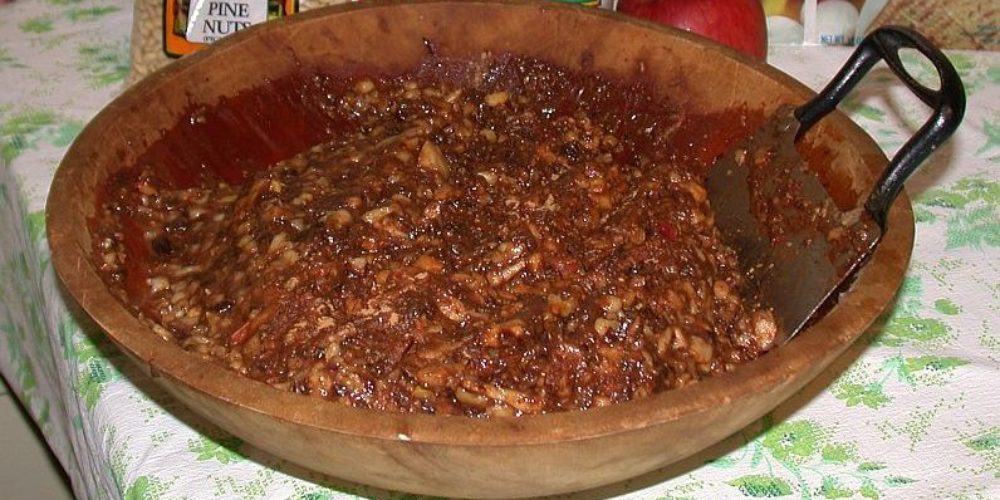 It’s Passover, and apparently this week in pop culture, it’s all about charoset. For those less acquainted, Wikipedia describes it as a “sweet, dark-colored paste made of fruits and nuts” but for me, it is best known as that weird thing on the Seder table that I dared not touch as a kid.

So what makes this paste different from all other pastes? For starters, it earned its own question on Jeopardy!

It’s a shame all 3 contestants were stumped by this $600 question, because any kid in Hebrew school tell you that the answer was “mortar.” Though to be fair, if you then asked that same kid what mortar is, he would probably have no idea.

Kudos to Alex Trebek for correctly pronouncing charoset. And extra points for his what I think was a joke, but delivered with that beautiful Trebekian monotone: “Mortar… what must it taste like? Ah!”

On the other side of the world, charoset is not only making a splash on Israelis’ seder plates, it’s appearing in their ice cream. During Passover time, Ben & Jerry’s removes their non-kosher varieties and stock only about 10 flavors on Israeli supermarket shelves. This year they have included a special limited-edition flavor: Charoset!

Unfortunately it doesn’t have a clever punny name such as “Holy Chutzpah Charoset” or “Bibi’s Charoset Blunder”, but that’s not stopping people from hitting up this special treat. One week ago, Huffington Post reported that only a few hundred pints remain of the 4000 pints originally produced. By now it’s safe to imagine they are completely sold out.

A friend of mine currently living in Israel searched through 5 stores trying to find it. And after finally tasting this precious dessert, he says “it lives up to all the hype.”

I can’t imagine what Charoset-flavored ice cream tastes like (I know, it tastes like charoset…), but I hope that Ben & Jerry’s might consider a global production for all the Diaspora Jews next year.

With all the seders already out of the way this year, you’re probably sick of charoset by now. But if you’re willing to try just one more recipe, why not go with these with some Moroccan Charoset Balls? Created by Susan Barocas, these balls were one of several delicacies at the White House Seder, an annual tradition since 2008. If they’re good enough for President Obama, then they’re good enough for your taste buds.